Gone Too Soon Wiki
Register
Don't have an account?
Sign In
Advertisement
in: 2009 births, 2014 deaths, Plane crash deaths,
and 2 more

7 shot down in Ukraine (which killed all 298 people on board), Megan died along with her parents, Dave Hally and Kim Hally-Verhaegh. She was leaving to Bali (just for a dream vacation), Before the Hallys left the Netherlands to Indonesia, Megan said her last words to her grandmother (Kim's mom), it was "I Love you", "Zegt van doei" (which is a goodbye in Dutch), and "Bye", Megan also blew kisses to her grandma before she went in to the airport. They boarded on the ill-fated plane, MH17, Megan's and Kim's final selfie was taken by Dave, before departure, they were ready to take off. When the plane crashed in Ukraine, someone took a video and captured Megan's luggage, which was on fire (can be seen on the Dutch documentary of MH17). Megan loved the color pink, butterflies, and her family, she also loves to smile. 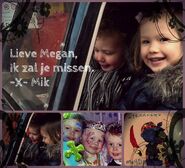 Megan's seat on the seating map of MH17. 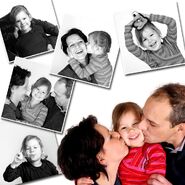